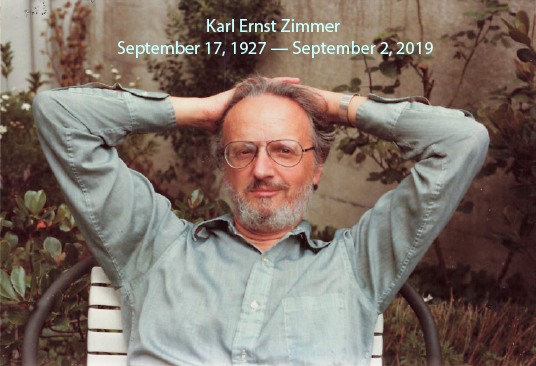 Karl Zimmer seemed destined to become a linguist. By the time he came to the United States to attend college he was already a speaker of German, Turkish, and French, and had studied Greek, Latin, and English; having grown up in a home where Russian was frequently spoken, he also knew some Russian. In 1935, because of serious childhood illnesses, he was taken by his mother from Germany to Switzerland for cures; while there he acquired French. Karl’s father was a German geologist who had been engaged by the new Turkish republic in 1935 to survey the country in search of natural resources. In 1939, on the eve of World War II, he brought his wife and son to Ankara, where Karl became fluent in Turkish. His linguistic mind was thus primed by a collection of typologically different languages.

He came to the U.S. in 1946 as a post-war immigrant, entering the University of Chicago as an undergraduate in 1947 and becoming a U.S. citizen in 1953. His graduate training was at Columbia, where his linguistic thinking was honed by Uriel Weinreich, Robert Austerlitz, and William Diver; he received a PhD in 1963. His dissertation (Zimmer 1963) dealt with affixal negation in English, French, German, and Russian, with additional exploration of several non-Indo-European languages (Finnish, Yoruba, Mandarin Chinese, Japanese, and Thai).

In 1956 he married Suzanne Clements, with whom he came to Berkeley, where they had two children, Paul and Catherine. Suzanne Clements Zimmer died in a tragic accident in 1977. In 1980 Karl married Ronelle Alexander, who survives him. She is now a Professor Emerita in Berkeley’s Department of Slavic Languages and Literatures. The two of them spent many years exploring the languages and cultures of the Balkans and Turkey.

Karl’s linguistic interests were centered on puzzles of morphophonology across languages. In the published version of his dissertation, his chair, Uriel Weinreich, praised Karl as one of “many realistic linguists [who] naturally grew skeptical of strict regularity in any domain of language” (in Zimmer 1964: 3), concluding that the work was “establishing some of the limits of generative grammar in derivational morphology” (in Zimmer 1964: 4). And, indeed, Karl went on to probe for ways in which phonology and morphology do not fit easily into systems of almost exceptionless rules. It was the exceptions that captured Karl’s interest, and he sought to explain unexpected details of vowel harmony, prosody, nominal compounds, case, and causative constructions, among others. Over time, much of his research focused on Turkish, where he could draw on near-native intuitions. Perhaps he will be remembered best as a guiding force in the establishment of modern Turkish linguistics. In 1982, together with Dan Slobin, a Berkeley psycholinguist and fellow Turkish researcher, he established what has become a biennial International Conference on Turkish Linguistics, convening at various times in the United States, Europe, and Turkey. Karl took part in the first ten of those conferences, energizing a rising generation of Turkish linguists. In 2009 his career was celebrated by former students and colleagues with a conference at Boğaziçi University in Istanbul, resulting in a Festschrift in his honor (Erguvanlı-Taylan & Rona 2011). The editors concluded their tribute with a paraphrase of a 17th century verse line, dilleri var bizim dile benzemez ‘they have a language, nothing like our own’, with their appreciation for their teacher: Hocamız var, kimselere benzemez! we have a teacher, nothing like any others’.

Karl’s long career was centered at Berkeley, where he was appointed in 1965 as an assistant professor in the Department of Linguistics, rising to the rank of professor and remaining there until his retirement in 1991. On the way he served as chair or acting chair four times, in 1974-78, 1981-82, 1983-86, and 1988-89. And at the end he was honored with the Berkeley Citation for distinguished service to the University and to the Department of Linguistics. But it was not the end, because Karl remained actively engaged with students and colleagues during the years that followed. In the Festschrift, another departmental chair, Larry Hyman, wrote of the many “scholars, junior and senior, who admire him for his wisdom and critical ability” (Hyman 2011: 14). Hyman quotes another colleague, Paul Kay: “Both in and out of the chair, Zimmer has been the person who has provided the glue that has held the Department together. He has listened to everyone, sought and achieved compromises and never compromised his own principles” (Hyman 2011: 14).

Karl was an extraordinarily good colleague and friend. He was an attentive listener—supportive, not judgmental, caring about the life concerns of others. Those who were close to him appreciated his sharp and observant mind, his quiet and understated wit. He delighted in good wine and food, sharing it with family and friends with enthusiasm. And he enjoyed physical activity into his eighties. He went trekking in Nepal with his son, hiking in the Cascade mountains and Canadian Rockies with his wife, and he rode his bike both to campus and up to Tilden Park. He loved music and movies; he read fiction in several languages and passed on his recommendations with cogent evaluations; and he always enjoyed travel. He was proud of the accomplishments of his son, Paul, and his daughter, Catherine; and he shared many interests and activities with his wife, Ronelle Alexander.

Karl did not only enjoy literature, but he was also a witty poet, composing short, pithy creations in German and English. His poems dealt with the vagaries of life and human relationships, linguistics, and, especially, cats (in English) and whales (in German). Over the years he assembled a little collection of Walfischgedichte (Whale Poems). One of them gives us a window into Karl’s endlessly probing and philosophical mind:

Whether a whale thinks about us –
That we don’t know.
And even if we knew that he does,
We wouldn’t know
If he asks himself
Whether we think about him.

Ronelle, in her email notice to friends and colleagues of Karl’s passing, added that “his ashes will be scattered at sea according to his wishes: in a place where one of his beloved whales might chance to swim by.”

Rest in peace, dear friend and colleague. We will not see your like again, but you will long remain in our memory.

Karl Zimmer is survived by his wife, Ronelle Alexander (of Berkeley, California); his daughter, Catherine Zimmer (of New York City); his son, Paul Zimmer and his grandchildren, Serafina Valisa and Lucas Zimmer (all of Tallahassee, Florida). There will be a memorial celebration of Karl’s life on December 8, 2019, from noon to 3 PM, in the Toll Room at Alumni House on the Berkeley campus.

Zimmer, K. E. (1964). Affixal negation in English and other languages: An investigation of restricted productivity. Word, 20(2), Monograph No. 5.