In addition to all the publications that are listed here, here, here, and here, Berkeley linguists have been up to so much more!

Keith Johnson was a member of a team (together with UCB Post-doc Matthias Sjerps, and UCSF Post-doc Neal Fox, and UCSF faculty Edward Chang) who have just published a new paper on "Speaker-normalized sound representations in the human auditory cortex" in Nature Communications.

The Proceedings of Sinn und Bedeutung 23 have now been published, containing the following papers by faculty, students, and/or alumni:

Congrats to professor emerita Leanne Hinton, who has been awarded the 2019 International Guardians of Culture and Lifeways “Honored One” Award from the Association of Tribal Archives, Libraries and Museums!

The Proceedings of the International Congress of Phonetic Sciences (ICPhS) 2019 have now been published, containing the following papers by current faculty and students (in addition to numerous alumni):

Larry Hyman recently authored an LSA online tribute to Victoria A. Fromkin (Berkeley BA 1944). You can read it here.

Congrats to Larry Hyman, who will be delivering the 14th Annual Joshua and Verona Whatmough Lecture at Harvard next week. Larry's talk is entitled The Fall and Rise of Vowel Length in Bantu.

A new article by Amy Rose Deal has just appeared in Linguistic Inquiry, entitled Raising to Ergative: Remarks on Applicatives of Unaccusatives.

This Thursday Peter Jenks will give a colloquium at Cornell University, entitled Anchored definite descriptions.

Regier in Sweden and Germany

Terry Regier visited Sweden and Germany March 2-13 for a series of talks: An invited keynote at the kickoff event for the Chalmers AI Research Center in Gothenburg, followed by talks at the University of Gothenburg, Uppsala University, and Leipzig University.

The 4th volume of the Proceedings of the Linguistic Society of America has just been published, showcasing research presented in January at the 2019 Annual Meeting. In the collection are three papers by students and faculty:

Last weekend was a busy one for Berkeley linguists, with department members at conferences in Dwinelle Hall dedicated to Celtic and Amazonian languages as well as attending conferences in other locations! 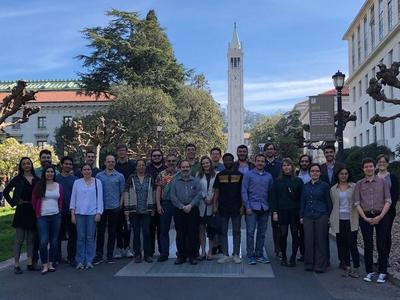 Virginia Dawson and Samantha Wathugala at Formal Approaches to South Asian Languages 9, Reed College, Portland (after presenting their paper, In support of a choice functional analysis of Sinhala ðə) 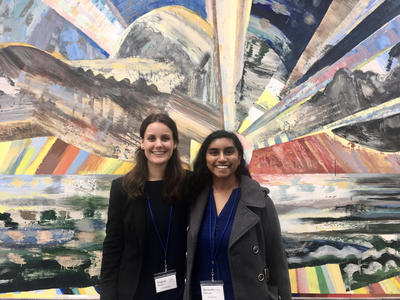 And to cap things off with some true linguistics in action: here's Susan Lin presenting Linguistics: making sense from noise at the East Bay Science Cafe, last Thursday (March 14). 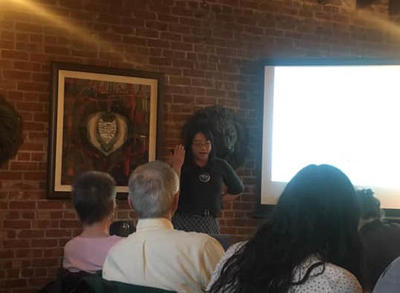 Gahl publishes in Journal of Phonetics

A new article by Susanne Gahl and Harald Baayen on Twenty-eight years of vowels: Tracking phonetic variation through young to middle age adulthood has just appeared in Journal of Phonetics. Congrats, Susanne!

Some updates from the Survey of California and other Indian Languages:

Peter Jenks will be giving two talks in Germany next week. First, he will give an invited talk at Universität Potsdam on March 5, entitled Pronominal distinctions as definiteness distinctions. Then, he will be an invited speaker at the "Sorting out the concepts behind definiteness" workshop at the Deutsche Gesellschaft für Sprachwissenschaft in Bremen on Wednesday, March 6, with a talk entitled Anaphoric definites as anchored definites.