On Saturday, May 7, some 60-70 linguists and others from Berkeley and afar gathered at the Faculty Club for a celebration of Keith Johnson's career on the occasion of his retirement. (Keith will be a Professor of the Graduate School as of July 1.) In-person speakers included Molly Babel, Meg Cychosz, Erin Diehm, Andrew Garrett, and Steve Goldinger; speaking by video recording or Zoom were Mary Beckman, Christian DiCanio, Larry Hyman, Richard Wright, and a series of (other) former students. Terry Regier served as master of ceremonies; Meg, Andrew, Siti Keo, and Hannah Sande were co-organizers.

During the event, Molly Babel announced that she, Yao Yao, Elizabeth Strand, and Grant McGuire will be editing Training Curiosity: Papers in honor of Keith Johnson, a special issue of Language and Speech that celebrates Keith's career and contributions. In the spirit of Keith’s style, they encourage collaboration across researchers with complementary theoretical and methodological angles from academic and industry perspectives on topics that speak to Keith’s impact, and invite one-page abstracts by August 1, 2022. Please submit abstracts and inquiries to Molly Babel (molly.babel@ubc.ca).

Assistant Adjunct Professor Chris Beier has been awarded a 2022 Dynamic Language Infrastructure-Documenting Endangered Languages Fellowship from the National Endowment of Humanities (NEH). This grant will support her project entitled Transcription, Parsing, and Comparative Analysis of Tone in Iquito Texts. Beier will be on leave in order to carry out this project in Peru between June 2022 and August 2023.

Beier offered this description of the funded project: "This project advances the documentation and description of Iquito, a critically endangered Zaparoan language of northern Peruvian Amazonia, with a focus on its complex tonal system. Core activities include transcription, parsing, and analysis of texts from circa 1960; re-parsing of re-analyzed texts from 2002-2018; and comparative analysis of these texts to inform ongoing grammatical description of Iquito. Because Iquito's tonal system includes both boundary Hs and HLL melodies that surface in multiple domains and across word boundaries, text-based analysis of connected speech is an indispensable tool for discovery. Thorough documentation of Iquito’s tonal system will inform the typology of tone in Amazonia, and contribute to cross-linguistic typology and theories of grammatical tone."

The UC Berkeley Department of Linguistics is celebrating the distinguished career of Professor Richard Rhodes at the Patio of the Faculty Club on Monday, April 18, 2022, from 4 to 6 PM. Congratulations, Rich!

Congratulations to the new principal of Bowles Hall, Gašper Beguš!

Larry Hyman has received notification from French Ambassador Philippe Etienne that he has been appointed Chevalier (Knight) in the Ordre des Palmes Académiques. As Ambassador Etienne explains, "this honor reflects the French authorities' gratitude for [Larry's] efforts to promote French language and culture" and culminates a span of over 50 years in which Larry has studied abroad in Bordeaux, held visiting research positions in Paris, Lyon and Toulouse, and received other invitations in France. He is also known for hosting many French visitors in Berkeley. Along with his French colleague, Clément Sanchez of the Collège de France, Larry has served as Director of the France-Berkeley Fund since 2010. More information is available here. Congratulations, Larry!

Our heartfelt congratulations to Larry M. Hyman, who has received the Victoria A. Fromkin Lifetime Service Award from the Linguistic Society of America!

The award is named after linguist Victoria Fromkin and given to a member of the LSA who has performed "extraordinary service to the discipline and to the Society" throughout their career.

From the LSA citation:

"Larry M. Hyman's career is a testament to the idea that scholarly accomplishment goes hand in hand with devotion to service to the field. On LSA committees and as part of its leadership, as an organizer of scholarly meetings and a member of editorial boards around the world, as a passionate advocate for the LSA, and as a host and sommelier at innumerable linguistic events, Hyman makes us all want to belong to the community of linguists."

Congratulations to Lev Michael, who has been awarded the Victor Golla Prize from the Society for the Study of the Indigenous Languages of the Americas (SSILA)!

The Victor Golla Prize is presented in recognition of a significant history of both linguistic scholarship and service to the scholarly community, with service that expands the quality and/or dissemination of such scholarship.

An excerpt of the full announcement was circulated in the SSILA newsletter:

Lev exemplifies Victor’s virtues of scholarship grounded in an empirical practice that encompasses ongoing language documentation and text philology, pursuing answers to big-picture questions about areality and language change, and effectively integrated with service to a broad community. He excels in the area of South Americanist language documentation, linguistic analysis, and community language support.

Among his many accomplishments, Lev started the biennial Symposium on Amazonian Languages, which meets in Berkeley. In March of last year, SAL 3 had 21 talks by scholars from Brazil, Canada, and the US. Of course there are bigger events for Latin Americanists generally, but nothing comparable in North America for Amazonianists. He created SAPhon, the South American Phonological Inventory Database. This online resource contains information about phonological inventories for 363 South American languages, allowing users to view information about individual languages and sounds, with a map browsing function.

Lev and his research partner Chris Beier are committed to capacity building in the Amazonian communities where they work. This is a critical part of Lev’s pedagogy and mentoring of North American students, and shines through in his work. He does training and involves community members in the work he and Chris do, and makes sure there are results that benefit them.

The committee found that Lev exemplify the spirit of this award through the breadth, quality, and availability of his research, his success in engagement with communities, and by the inspiration he brings to new generations of linguists.

Mikkelsen and colleagues publish in Language

NSF grant to Wilbanks and Johnson

Congrats to Eric Wilbanks, whose NSF Doctoral Dissertation Research Improvement grant (with Keith Johnson) is being recommended for funding! The project, titled "On-line Integration during Speech Perception", will involve several experiments tracking the time-course of sociophonetic perception, and includes funding for an improved eye-tracking set-up for the lab.

Bleaman at AJS and UCL
Isaac Bleaman will be giving a talk at the Association for Jewish Studies on the topic "Attitudes toward change in a maintained language: Yiddish in New York" (Dec. 16 at 9:30am) and serving as a respondent on another panel on minority languages in Israel.
He will be giving a longer version of the talk (in Yiddish) at University College London on Jan. 12 at 10am, an event in the Ada Rapoport-Albert Seminar Series on Contemporary Hasidic Yiddish.

Sande joins the faculty
We are delighted to announce that Hannah Sande will be joining Berkeley Linguistics in January 2021! Hannah will begin teaching classes in Fall 2021, and will spend spring semester advising (remotely), and doing research.

The program for the 51th annual meeting of the North East Linguistic Society (to be hosted virtually by the Université de Quebec à Montreal) has just been released, promising the following presentations by current department members and recent alumni:

Gahl publishes in Journal of Speech, Language, and Hearing

Congrats to Susanne Gahl on her recently published paper:

The Faculty of the Berkeley Linguistics Department issued a statement on the George Floyd killing.

On June 2, Leslie Francesca Hyman married Matthew Cascardi, son of Anthony Cascardi, Dean of Arts and Humanities, in an intimate and joyful Zoom ceremony, courtesy of Oakland City Hall. As Larry has been saying all along, "I'm not losing a daughter, I'm gaining a dean!"

Congratulations to the happy couple and their families! 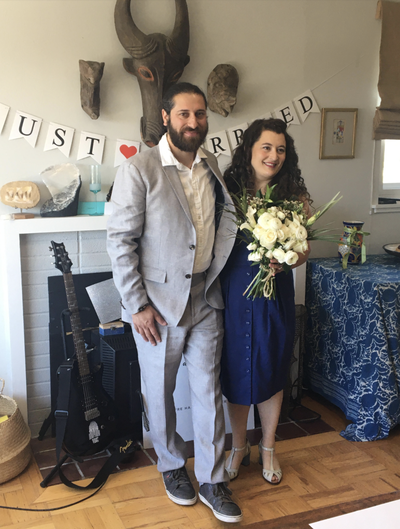 Andrew Garrett channeled some of his pandemic-induced stress into a creative work written over spring break: a short satirical edition of poems minimally adapted from the ancient Greek poetry of Sappho and Alcaeus in the form of a book of poems by his and Leslie Kurke's cats, also named Sappho and Alcaeus, together with full scholarly apparatus. Primarily of interest only to classical philologists, Poetarum lesbiorum carmina pestilentialia ("Plague poems of the Lesbian poets") can be read as a lovely printed book or in proof here.

Dr. Katherine Hilton has joined the linguistics department this semester as a temporary lecturer teaching Ling 100 “Introduction to Linguistic Science”.  Dr. Hilton earned her PhD in 2018 from Stanford, and now lives in Berkeley.  Her dissertation was entitled “What does an interruption sound like?” (committee: Rob Podesva, Penny Eckert, and Meghan Sumner), so she might be paying close attention if she hears you interrupt someone.  She has an impressive teaching history at Stanford both as a TA (Phonetics, AAVE, and Language and Society), and as an instructor of record (Intro to Linguistics, Language and Society, and Discourse Structure).