Berkeley authors are depicted below! 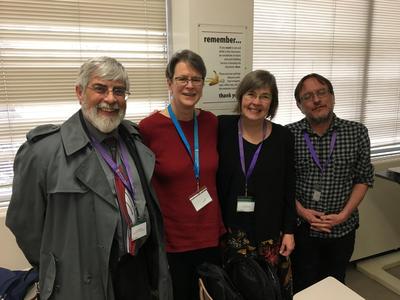 Congrats to fifth-year grad student Virginia Dawson, who has just been announced as an invited speaker at the upcoming TripleA conference at MIT! TripleA describes itself as "a workshop that aims at providing a forum for semanticists doing fieldwork on languages from Africa, Asia, Australia, and Oceania."

Congrats to fifth-year grad student Emily Clem, whose paper Amahuaca ergative as agreement with multiple heads  has just been been published in Natural Language and Linguistic Theory!

The 2018-2019 colloquium series continues this coming Monday, October 22, with a talk by Ashwini Deo from the Ohio State University. Same time as always, same place as always: 3:10-5 p.m., 370 Dwinelle Hall. The talk is entitled "Marathi tense marking: A window into the lexical encoding of tense meanings", and the abstract is as follows:

Partee (1973) first observed that natural language tense expressions are analogous to pronouns in that they can be interpreted indexically, anaphorically, and like bound variables. These referential (i.e. indexical+anaphoric) and non-referential interpretations of tense marking have not been yet shown to have distinct reflexes in natural language temporal expressions – i.e. no language has been claimed to lexicalize these distinctly. I argue that Marathi [mar, 71,700,000 speakers], an Indo-Aryan language of the Southern subgroup, morphosyntactically distinguishes between referential and non-referential temporal meanings. This lexicalization pattern, observed also in several other New Indo-Aryan languages, points the way to a more nuanced understanding of distinctions with respect to temporal reference in natural languages. The second part of the talk traces the diachronic emergence of this encoding pattern in the New Indo-Aryan languages, comparing it to the systems observed in Old and Middle Indo-Aryan. I tentatively suggest that the referential—non-referential contrast in the temporal domain arises due to the emergence of new present and past tense markers (auxiliaries) in a tenseless aspectually-based system.

On Oct 27 and 28, Berkeley will be hosting the annual meeting of California Universities Semantics and Pragmatics, a.k.a. CUSP. CUSP is an informal annual conference that brings together people working in formal semantics and pragmatics at universities across the state. This year, Berkeley linguistics will be represented by presenters Ginny Dawson and Line Mikkelsen (along with visiting scholar Peter Alrenga). You can find the program and the RSVP form here. 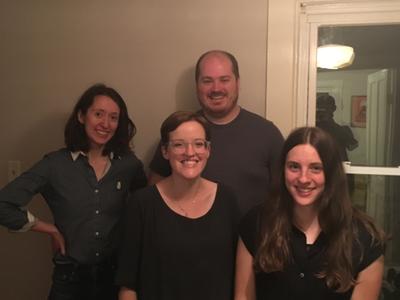 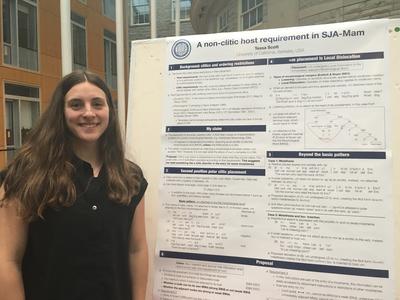 Tessa Scott with her NELS poster 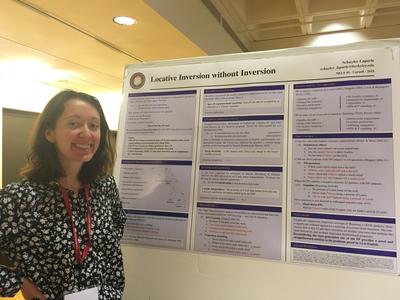 Schuyler Laparle with her NELS poster 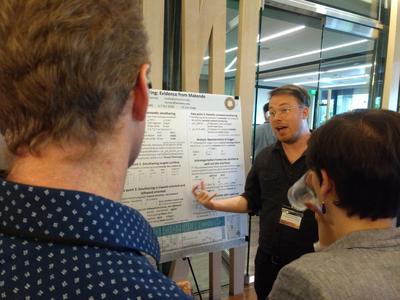 Welcome to Pete Alrenga, who has just joined us as a visitor! Pete sends the following words about himself:

Hi!  I'll be visiting from UMass Amherst until mid-November, and I'll be working with Line Mikkelsen while I'm here.  Line and I are developing a project around a long-standing mutual interest of ours, namely the structure and interpretation of identity, similative, and equative constructions.  In English, these notions are canonically expressed by same, different, like, such, so, etc., and our own previous work has explored the intriguing double lives that these items lead as comparative operators and anaphoric devices.  One of the major goals of our project is to extend our understanding of such items/constructions to lesser-studied languages, and to assess the extent to which this range of uses is attested cross-linguistically.

Most of my past work has explored issues in the semantics and pragmatics of scalarity:  degree comparatives, numerals and their modifiers, and more recently, scalar implicatures and Grice's nondetachability doctrine.  I'm looking forward to my stay here at UC Berkeley...stop by some time and say hello!

On October 19, Line Mikkelsen will be giving a talk with Jorge Hankamer (UCSC) in Stanford's Syntax and Morphology Circle (SMircle) series. The talk is entitled "CP complements to D".

A new SSILA Archiving Award has been inaugurated, the award committee for which is chaired by Andrew Garrett.  The society says that "this award highlights the importance of creating long-term archival materials that are accessible to all communities concerned, including heritage and language communities as well as scholarly communities.

Cheng, Clem recognized by the LSA

Fifth-year grad students Andrew Cheng and Emily Clem were each recognized by the LSA this week in connection with the upcoming annual meeting in New York City.  Andrew was named a finalist for the Five-minute Linguist event, which features short, informative, engaging, and accessible talks about linguistics research on a variety of topics. Andrew's presentation is entitled Style-shifting, Bilingualism, and the Koreatown Accent. Emily has been named as the third place winner of this year's Student Abstract Award, recognizing "the three best abstracts submitted by a student for a paper or poster presentation at Annual Meeting". Emily's prize-winning abstract is entitled The cyclic nature of Agree: Maximal projections as probes.

Congrats to Susanne Gahl, who has just been named a Mercator Fellow by the DFG (German Research Foundation)! The fellowship lasts for three years and will support a collaboration with Ingo Plag and others at Heinrich-Heine Universität Düsseldorf.

Congrats, Larry, on the celebratory volume, and congrats to the editors and authors!

This weekend features two conferences at which Berkeley Linguistics will have a major presence, one each in the east and the west:

The Proceedings of Sinn und Bedeutung 21 have just been published, containing four papers by faculty, students, and/or alumni:

Congrats to fifth-year grad student Virginia Dawson, whose paper A new kind of epistemic indefinite was recently published in the Proceedings of Sinn und Bedeutung 22!