Congratulations to the Berkeley linguists who will be presenting at the 2022 meeting of the Linguistic Society of America in Washington, DC.

In addition to this semester's TABLE series, Carlos Cisneros will be giving a colloquium talk on Monday, November 1 at 3pm in 370 Dwinelle.

Dr. Cisneros received his PhD from the University of Chicago in 2020 and is now a visiting assistant professor in the Berkeley Linguistics department with specializations in formal semantics, pragmatics, and fieldwork on native American languages. The talk is titled Capturing the indiscriminative reading of 'any', and the abstract can be found below.

The semantics of English any is a decades-old problem that remains unsettled in the literature. However, the literature has also refrained from full discussion of the various senses of any, focusing on NPI and free choice readings, but neglecting others. In this talk, I discuss the so-called indiscriminative reading of any (Horn 2000), which is available when any occurs with negation and is either explicitly modified by just, as in not just any, or is marked by intonation that indicates exhaustivity. This reading is often neglected in semantic analyses of any, although it is available for many polarity items similar to any across languages. I show that this reading is not easily captured by the most circulated semantic accounts of any, and that a new account is needed to explain the relationship between the NPI, free choice, and indiscriminative readings, in addition to their polarity distributions. By identifying analogous semantic phenomena among other English constructions, I posit a list of semantic ingredients needed for composing each of these readings: reference to low values on scales, strength-reversing environmental factors, and exclusive meaning. I then synthesize research on NPIs, degree semantics, and focus semantics to posit a basic meaning for any as a scalar indefinite, which can be elaborated into either an NPI, free choice item, or indiscriminative. At its core, any is an NPI in the sense of Krifka (1995), or an existential quantifier that activates domain alternatives. This already captures its NPI reading and distribution. However, it can take on an exhaustified interpretation via exclusive meaning operators (Coppock & Beaver 2013), thereby attaining its indiscriminative reading when the operator is interpreted under the scope of negation. The free choice reading is derived as well using a silent operator that induces a downward entailing environment in positive sentences, though it is itself averse to episodic environments. The proposal altogether fills some gaps in previous accounts of the meaning contribution and distribution of English (just) any.

The following (current and former) Berkeley linguists will be presenting at New Ways of Analyzing Variation (NWAV) 49, hosted by UT Austin and taking place online from October 19 to 24, 2021. Several of the presentations have already been pre-recorded and links are provided below. (Follow this story on our website for updates.)

Mairi McLaughlin will be giving a talk at the Philological Society at 8:15am on Friday, October 22, called "The Early French Press: Examining a New Text Type in Historical Linguistics."

There will be 6 (current and former) Berkeley-authored talks at the upcoming Westermann anniversary workshop* hosted in Berlin, November 4-6. The workshop focuses on areal and historical phenomena in Africa. The 6 Berkeley-affiliated talks are these:

* Full title: Diedrich Westermann's legacy between Macro-Sudan Belt and Niger-Congo: an international workshop on the linguistic history in Central Africa commemorating the 100th anniversary of the 1st professorship for African languages in Berlin

In advance of the upcoming Westermann anniversary workshop (see this Calques story), Larry Hyman and Hannah Sande are hosting a session of practice talks. The times and dates are listed below, and all are welcome. Anyone interested in attending can reach out to Prof. Sande for the Zoom link.

TABLE: Toward a Better Linguistics Environment, a colloquium series taking place this fall, continues on Monday, October 18, with a talk by Kelly Elizabeth Wright (Michigan), held via Zoom and in person in Dwinelle 370 (hybrid) from 3-4:30pm. Those who would like to attend, including Berkeley linguists, need to register for the event regardless of mode of attendance (Zoom registration; in-person registration). The talk is entitled "Raciolinguistic Ideologies as Institutionaized Linguistic Racism," and the abstract is as follows:

Raciolinguistic ideologies are said to conflate certain bodies with perceptions of linguistic deficiency. This talk - taking a historical, sociolinguistic framing - offers examples of linguistic racism across institutions as a means of underscoring the insidious and powerful nature of raciolinguistic ideologies and the long-term outcomes of their operation. We will begin with a primer on relevant bullet points of Black history in the US, focusing on citizenship and early language-based access restrictions. We will then use our knowledge of this shared social history - demonstrating how language and race operate as separate, yet intersectional, sociopolitical categories - to illustrate the operation of linguistic racism by considering several brief examples from across institutions. We will look most deeply at education and the law, interrogating the ways in which Standard language ideologies are expected and maintained in these arenas, and how violations of said expectations can work to negatively characterize or sometimes further oppress marginalized populations. I’ll preview for you my current research on ideological uptake and style shifting among Black professionals and judgments of Black professional speech which asks: what perceptual mechanisms help sustain these various linguistic oppressions? We will end by considering concrete steps we can take in our curricula and pedagogy which centralize linguistic justice goals, alongside the development of equitable and representative models of experimentation and accessible distribution of research findings in an increasingly fact phobic world.

Learn more about the Linguistics doctoral program at this virtual fair!

The University of California, Berkeley is holding its second virtual Graduate Diversity Admissions Fair on October 18-22 to help prospective professional, master's, and doctoral students learn more about UC Berkeley overall, our application process, and departments in your area of interest. Register for plenary sessions and department information sessions on our event webpage.

This admissions fair was developed specifically for underrepresented minority students considering graduate school, though it is open to all attendees.

The Linguistics zoom session is on Oct. 19 from 3-4pm.

Register for the Fair! 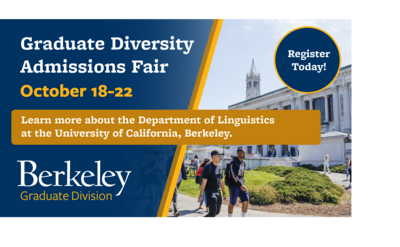 The Center for Equity, Gender, and Leadership at the Berkeley Haas School of Business will be launching their Responsible Language Guide for AI & ML (on which Julia Nee is an author) with a panel discussion featuring leaders in responsible innovation at several leading tech companies. The event will take place on Thursday, October 14 from 4 to 5pm (register here).

TABLE: Toward a Better Linguistics Environment, a colloquium series taking place this fall, continues on Monday, October 11, with a talk by Robert Englebretson (Rice), held via Zoom and in person in Dwinelle 370 (hybrid) from 3-4:30pm. Those who would like to attend, including Berkeley linguists, need to register for the event regardless of mode of attendance (Zoom registration; in-person registration). The talk is entitled "Linguistics, blindness, and braille: Deconstructing sight-centric assumptions and promoting diversity in teaching and research," and the abstract is as follows:

This talk focuses on blindness as a source of diversity in linguistics teaching and research. I will highlight how enhancing the accessibility of our field enables greater participation, which then feeds back into broader and more diverse research perspectives. I will begin by discussing my work on IPA Braille (Englebretson 2009), which sought to improve general access to our field for blind students and professionals. I will then turn to a discussion of braille as a tactile writing system, and what the unique aspects of (English) braille orthography contribute to the cognitive and reading sciences (e.g. Fischer-Baum and Englebretson 2016). I will conclude with a brief introduction to an ongoing federally-funded multi-disciplinary research project that seeks to address some of the potential barriers to braille literacy (Fischer-Baum, Englebretson, and Holbrook).

The Annual Meeting on Phonology (AMP 2021), taking place online from October 1 to 3, will feature presentations by the following Berkeley linguists:

ASL at Berkeley, the first ASL club on campus, meets every other Wednesday to learn beginner signs, learn about Deaf culture and ableism, and build community! Additional information is available at the group's linktree. Please contact Beth Auclair with any questions.

Nee and Smith present at EAAMO '21

Julia Nee and Genevieve Smith (Center for Equity, Gender, and Leadership at UC Berkeley Haas) will be presenting their paper "Advancing social justice through linguistic justice: Strategies for building equity fluent NLP technologies" (co-authored with Alicia Sheares and Ishita Rustagi) virtually at the the Conference on Equity and Access in Algorithms, Mechanisms, and Optimization (EAAMO ‘21) on October 7.