Congratulations to Gašper Beguš, Isaac Bleaman, and Alan Zhou (BA 2021), who were just published in Proceedings of Interspeech 2022!

Gašper Beguš commented on a recent whale study that was covered by NBC News. Click here to read it!

Andrew Garrett will be one of four panelists at the LSA's September 28 webinar on "Tenure, promotion, and academic review in documentary linguistics." The other panelists are Kayla Begay (PhD 2017), Alice Harris, and Jorge Rosés Labrada. Click here to register.

The 2022-2023 colloquium series begins on Monday, September 19, with a talk by our very own Amy Rose Deal, taking place in Dwinelle 370 and synchronously via Zoom (passcode: lxcolloq) from 3:10-5pm. Her talk is entitled "On ditransitive person restrictions in primary object languages," and the abstract is as follows:

When a ditransitive is expressed with clitic pronouns or agreement for both objects, oftentimes restrictions are in place on the relative person of the two objects. A typical pattern is that the theme object must be 3rd person. This pattern has been the subject of intensive study by syntacticians over the last two decades. In this talk I investigate the implications of this work for primary object languages, where the "object markers" controlled by the patient in a monotransitive are controlled by the goal/recipient in a ditransitive. Various prominent syntactic analyses of person restrictions, when put together with commonly assumed ideas about the syntax of primary object languages, lead to the prediction that person restrictions should be absent in ditransitives in languages of this type. This prediction is wrong: in fact, it has proven hard to find a primary object language that LACKS a person restriction in ditransitives. I critically review two lines of analysis that have been pursued regarding these person restrictions, and propose a new approach grounded in my recent work on the person-case constraint (Interaction, Satisfaction, and the PCC).

Anderson speaks at webinar on Unicode

Debbie Anderson will be participating in a webinar on September 28, 2022, from 10:30-12:30 that will discuss Unicode and internationalization. Her brief talk will focus on the process of adding characters and scripts into the Unicode Standard, so that the letters/symbols can (eventually) be used on computers and devices — important for those working with "lesser-used" languages. Other talks will discuss other ongoing projects of the Unicode Consortium.

The event is free but registration is required. There will be a live Q&A session afterwards.

SLab meetings and readings in fall 2022

Calques is sharing the following announcement from Amber Galvano, one of the co-organizers of the Sociolinguistics Lab at Berkeley:

Our first SLaB meeting will be Monday, September 12th, 2-3pm, in 5125 Dwinelle (Spanish & Portuguese Library) and on Zoom. The deadline to vote here on this semester's readings, the first of which will be discussed on the 12th, is next Wednesday, September 7th.

Garrett and Harris publish in Language

Congratulations to Andrew Garrett and Alice Harris on the publication of their article "Assessing scholarship in documentary linguistics" in Language!

Congrats to Hannah Sande, who just published an article "The phonology of Guébie" with Language and Linguistics Compass!

Zachary O'Hagan is in Bucharest, Romania this week giving a presentation on "Nominalizers in Caquinte" as part of a workshop on nominalizations in Arawak languages, at the annual meeting of the Societas Linguistica Europaea (August 24-27). He will be working remotely from Europe until October 10.

Berkeley linguists have been very busy this summer! We're happy to share the stories that were submitted to Calques during the break: 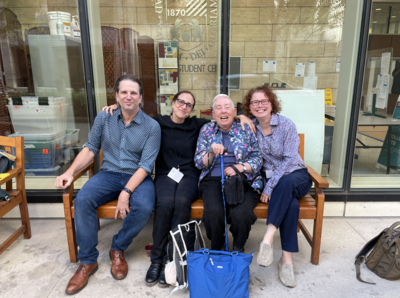 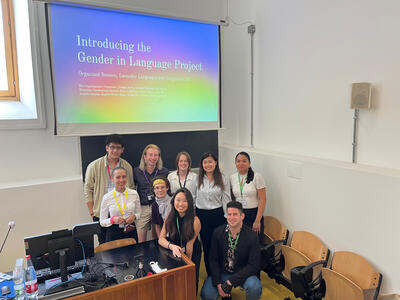 Sinn und Bedeutung 27 is taking place in Prague on September 14-16. Congrats to Madeline Bossi, who will be presenting a talk entitled "Higher order ignorance in Kipsigis epistemic indefinites"!

Congratulations to Schuyler Laparle, who has accepted a position as Lecturer in the Department of Communication and Cognition at Tilburg University, beginning January 2023.