Calques is pleased to note that the call for papers for the 2020 Berkeley Linguistic Society Workshop has now been issued and abstracts are now being accepted! The workshop will take place February 7-8, 2020, with the theme of  "Phonological Representations: At the Crossroads of Gradience and Categoricity".

Abstract submission info be found here. Abstracts are due November 1, 2019.

Describing the nature and behavior of the sounds of language is a central concern in linguistics. Topics such as categoricity vs. gradience, the information included in representations, and the place of abstraction in the larger linguistic system are central to many theoretical debates. This workshop aims to bring together different approaches to capturing the behavior of speech sounds by fostering discussion among researchers from diverse backgrounds and perspectives.

The 2019-2020 colloquium series kicks off this coming Monday, Sept 23, with a talk by Khalil Iskarous (USC). Same time as always, same place as always: 3:10-5 p.m., 370 Dwinelle Hall. The talk is entitled The Dynamics of Linguistic Development: The Unfolding of Skill Interaction, and the abstract is as follows:

Recent work on the development of production, perception, and phonological skills in children has shown a remarkable amount of interaction between these skills, so that it is difficult to understand each separately from its relation to the others. This talk will introduce a predictive dynamical systems-based model of linguistic development that tries to capture these fundamental interactions between the skills. The goal is not to partake in the seemingly eternal zero-sum theoretical debate between nativist and empiricist outlooks, but to show how an explicit dynamical account can integrate linguistic input, architectural properties of a learning system, and a developing grammar, together with an articulatory action system and a perceptual system that allow a child to participate in their world through language. Some of the phenomena to be accounted for are Vihman’s articulatory filter and templatic regression, as well as the influence of phonetic practice on early phonological/lexical patterning.

The program for the upcoming 2020 winter meeting of SSILA, the Society for the Study of the Indigenous Languages of the Americas, has just been released. SSILA will meet concurrently with the LSA. The program promises the following presentations by current department members and recent alumni:

In the days ahead Amy Rose Deal will be traveling to the University of Toronto to give a colloquium talk entitled Interaction, satisfaction, and the PCC, as well as a semantics talk on a recent manuscript entitled Uncentered attitude reports.

Calques is pleased to announce the colloquium schedule for spring 2020 -- mark your calendars! All talks are 3:10-5pm in Dwinelle 370.

Berkeley sociolinguistics will be represented at the upcoming conference New Ways of Analyzing Variation 48 by:

We are searching for an assistant professor of phonology!

The Department of Linguistics will be searching this year for a new Assistant Professor of Phonology!

The program for the 9th Conference on Indigenous Languages of Latin America (CILLA IX) has just been released, promising the following presentations by current department members and recent alumni:

The program for the 50th annual meeting of the North East Linguistic Society has just been released, promising the following presentations by current department members and recent alumni:

Here are some late-breaking additions to our file of linguists' summer updates:

Henry Sales worked as the Mam language consultant for the graduate field methods class two years ago and has continued to work with graduate students in the department on research on Mam. Henry is teaching a Mam language class at Laney College in Oakland, with assistance from Tessa Scott and recent alumna Emily Clem. The class meets every Saturday from 9:30-11:30am in room E207 at Laney College in Oakland. The link to the class website is here. All are welcome to come; the class is unofficial and free. If people want to be added to the mailing list they can email Tessa (tessa_scott@berkeley.edu). This class had spring and summer iterations as well -- check out this KQED story about efforts to teach Mam in Oakland.

Zach O'Hagan sends the following report from the Survey of California and Other Indian Languages:

If you have questions about the Survey of California and Other Indian Languages and its digital catalog the California Language Archive (CLA), don't hesitate to email us at scoil-ling@berkeley.edu, or talk to Andrew Garrett (Director), Ronald Sprouse (IT), or Zachary O'Hagan (GSR). We collect analog and digital materials on languages of the Americas, as well as from all Berkeley-affiliated researchers, irrespective of region of the world. Our holdings include over 450 collections, with approximately 19,000 items and 32,500 digital files, consisting of paper materials (field notes, file slips, etc.), audio and video recordings, photographs, a stuffed American goldfinch, and more! Much of it is born-digital or has been digitized. You can take the initiative with your own archiving, using our pre-archive interface. Here are some other news items since we last reported in April.

Emeritus professor Karl Zimmer passed away earlier this week. Zimmer joined the Department of Linguistics in 1965.  His research focused on Turkish and morphology;  see especially his important early paper on “Psychological correlates of some Turkish morpheme structure conditions” Language 45(2), 309-321. He retired from teaching in 1991 and was honored with a festschrift called Puzzles of Language: Essays in Honour of Karl Zimmer in 2011. The Department is planning a memorial event in his honor on Sunday, December 8, 2019, from 12-3pm at the Alumni House.

Students in Ling 140, Field Methods, are studying Runyankore this semester under the guidance of Larry Hyman and Runyankore speaker Daphine Namara. Ms. Namara is from Uganda and is a student in the Masters in Public Health program. Runyankore [NYN] belongs to the Rutara subgroup of Bantu, dialectal with Rukiga, and closely related to Ruhaya across the border in Tanzania and slightly more distantly to Luganda. 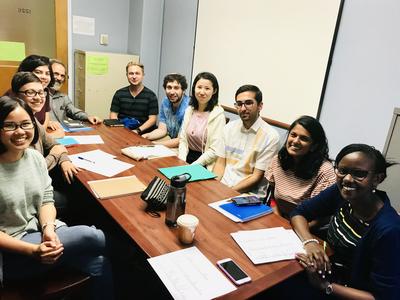