Rolle and Merrill publish in Phonology

Congrats to Berkeley PhD alumni Nicholas Rolle (2018) and John T. M. Merrill (2018) on the publication of their article "Tone-driven epenthesis in Wamey" in Phonology!

The first two volumes of Amazonian languages: An international handbook were officially published on January 30. Edited by Patience Epps and Lev Michael, these two volumes present grammatical descriptions of all reasonably well-attested linguistic isolates of the Greater Amazonian region. Volume I covers Aikanã to Kandozi-Shapra, and Volume II covers Kanoé to Yurakaré. (A chapter in Volume III will summarize what we know about the more poorly-attested isolates and small language families known only from colonial-era materials.)

Linguists currently or formerly affiliated with Berkeley contributed significantly to these volumes:

In addition, Zachary O'Hagan was the editorial assistant in the first several years of the project.

Congratulations to Isaac Bleaman, Katie Cugno (SF State), and Annie Helms on the publication of their article "Medium-shifting and intraspeaker variation in conversational interviews" in Language Variation and Change! The article is available in Open Access here.

In the last days of 2022, the Diccionario Iquito-Castellano was published by Editorial Abya Yala, a publisher devoted to works related to the Indigenous peoples of Latin America. This dictionary was compiled by Lev Michael and Christine Beier and documents the lexical, cultural, and grammatical knowledge of Jaime Pacaya Inuma, Ema Llona Yareja, Hermenegildo Díaz Cuyasa, and Ligia Inuma Inuma. This edition of the dictionary was prepared with the Spanish language assistance of Jaime Montoya Samamé.

Julia Peck was featured in an article on Ladino language revitalization in California Magazine, a publication of the Cal Alumni Association. Check it out here!

Isaac Bleaman is giving a talk at the Workshop on Language Variation and Change at the University of Chicago (virtually) on Friday, January 20, from 1:30 to 3pm Pacific time.

Justin Davidson and Hispanic Linguists from UCLA and UC Santa Cruz were awarded a UC Multicampus Research Initiative Grant! The project, entitled "An interdisciplinary approach to the study of Spanish-English bilingualism in California," lasts for at least two years and expands Professor Davidson's Corpus of Bay Area Spanish to now include Spanish-English bilinguals across all of California. Read more about the grant here!

Congratulations to Schuyler Laparle, who recently filed her doctoral dissertation:

Dr. Laparle will be taking up a faculty position at Tilburg University in the Netherlands.

Congratulations to Yevgeniy Melguy, who recently filed his doctoral dissertation:

The 53rd Annual Meeting of the North East Linguistic Society (NELS 53), hosted by the University of Göttingen in Germany from January 12 to 14, features presentations by Berkeley linguists:

Galvano publishes in Language and Speech

Congratulations to Amber Galvano and co-authors Nicholas Henriksen and Shayna Greenley on the publication of their article "Sociophonetic Investigation of the Spanish Alveolar Trill /r/ in Two Canonical-Trill Varieties" in the journal Language and Speech.

Hannah Sande will be giving a plenary talk at the OCP (Old World Conference in Phonology) in January. The conference runs January 25-27 and the conference website is here: https://ocp20.sciencesconf.org/. Her talk is titled "Discontinuous harmony is movement after local phonology."

The second workshop for the NSF-funded South American Nasality Project was held in Berkeley December 12-16 at the Hotel Shattuck Plaza. Eleven participants from nine universities (pictured below) reported on preliminary results from phonetic fieldwork with speakers of ten Amazonian languages, while the project PIs (Faytak, Lapierre, and Michael) led discussions on various aspects of methodology and workflow. Originally slated for December 2020, both fieldwork and the workshop were delayed by two years by the COVID-19 pandemic, so all were enthusiastic to get the project back on track! 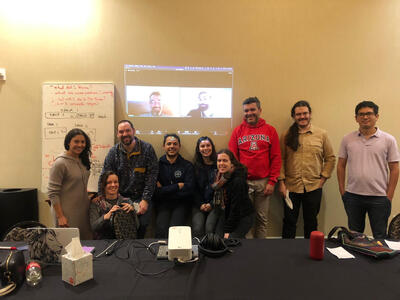