Congrats to Tessa Scott, whose paper "Two types of Resumptive Pronouns in Swahili" has been accepted for publication in Linguistic Inquiry!

Congrats to Zach O'Hagan, whose paper A Phonological Sketch of Omagua, co-authored with Clare Sandy (PhD 2017), has now been published in the International Journal of American Linguistics!

Congrats to Isaac Bleaman, whose entry on Yiddish Linguistics has now been published with Oxford Bibliographies! 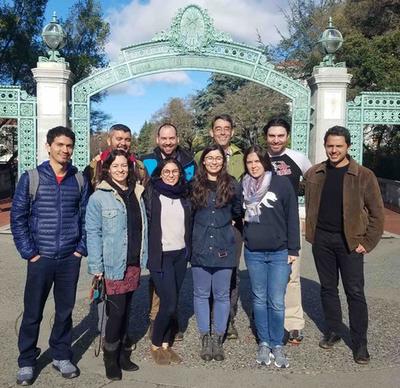 Larry Hyman writes to share the news that his 2019 edited volume Phonological Typology (Hyman & Plank, eds.),  along with his 2018 edited volume The Conjoint/Disjoint Alternation in Bantu (van der Wal & Hyman, eds.), is now available in paperback!

Anderson receives NEH grant
Congrats to Deborah Anderson, whose "Universal Scripts Project" has just received an NEH Preservation and Access grant! The project will support preparation of eight scripts—six historical and two modern—for inclusion in the international Unicode standard, to aid research using materials in historical scripts and to promote communication in minority language communities. This is a part of the larger Script Encoding Initiative.
Survey updates

Beier and Michael updates
Chris Beier writes to share the following report:
Lev Michael and I, Chris Beier, are thoroughly enjoying our current sabbatical year, which began in June and will end in August 2020. This sabbatical, which we are spending almost entirely in Peru, is dedicated to doing the culminating fieldwork, analysis, and writing necessary to produce major outputs of the long-running Iquito Language Documentation Project, which we launched in 2002.
So far, we have reached two major milestones:

• First, in August, we released a new Iquito–Loretano Spanish "students dictionary" and delivered it on paper to the Iquito heritage community. At almost 400 pages, it is a much better resource than its predecessors, and everybody in the community seems very pleased with it! We have also made the PDF available free online, at the Cabeceras Aid Project website.

• Then this week, we submitted a final (we hope) draft of our Iquito–English Dictionary to our publisher, Abya-Yala. This dictionary is about 650 pages and is quasi-encyclopedic in its content, so we are equally happy to have finished it! We'll be back with more news once it is actually published and available for distribution.
• Last but not least, and simultaneously, Lev is back on campus briefly (December 10 to 17)  for the first in a series of workshops that are part of an exciting new three-year NSF-funded project, "Nasal segments and nasal harmony in South American languages: Field phonetics and typology", which he, Susan Lin, and Myriam Lapierre are co-leading.
Survey updates

Here's a photo of the LRAP wrap-up meeting for this semester: 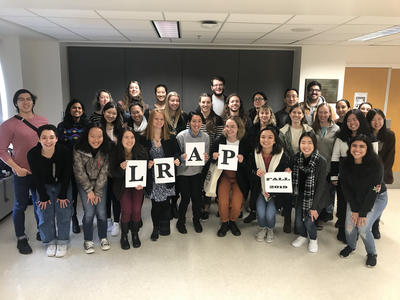 This week, postdoc Bernat Bardagil will be giving a talk called "Quotative strategies in Panará (Jê)" at the Workshop on Speech and Attitude Reports, organized by Leibniz-ZAS and held at the Museu Paraense Emílio Goeldi, in Belém (Brazil).

This week, Larry Hyman will be traveling to Japan to give an invited talk at the Word Prosody and Sentence Prosody Conference at the National Institute of Japanese Language and Linguistics. The title of the talk is Prosodic asymmetries in nominal vs. verbal phrases in Bantu.

This week, Dasha Kavitskaya will be traveling to Scotland to give a plenary talk at the Fourth Edinburgh Symposium on Historical Phonology. The title of the 2-part talk is “Conditions on sound change: precepts and propositions”.

In and around the linguistics department in the next (RRR) week: 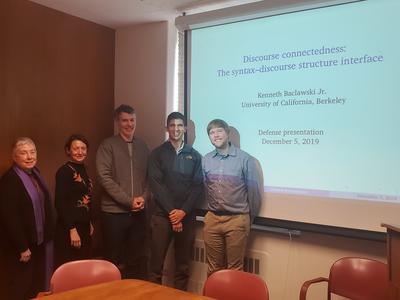 Next week, Amy Rose Deal will be traveling to Göttingen, Germany, to give an invited talk on the mass/count distinction at Number and Plurality: Cross-linguistic Variation in the Nominal Domain.

Congrats to alumnus Nik Rolle (PhD 2018) on the birth of his son Jude Thomas Deverell! 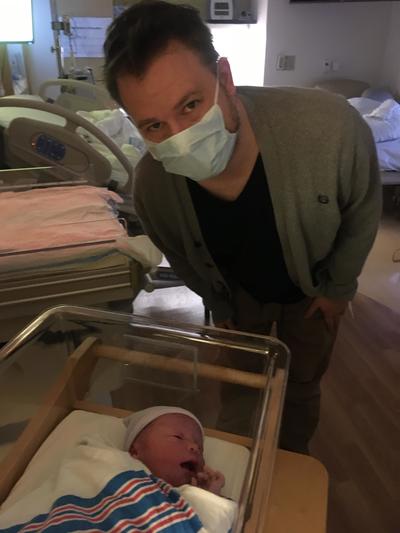 Cychosz, Johnson, et al, to appear in Journal of the Acoustical Society

Congrats to Meg Cychosz and Keith Johnson, whose paper (authors Cychosz, M., Edwards, J., Munson, B., & Johnson, K.) entitled Spectral and temporal measures of coarticulation in child speech will appear next month in the Journal of the Acoustical Society of America!